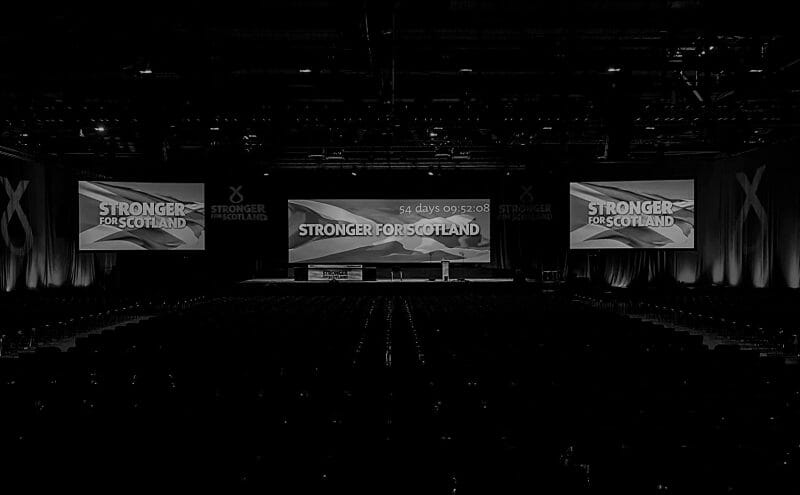 Adjacent to the media centre at this year’s SNP Spring Conference was a sleek, black grand piano. While no one among the press pack was willing to offer up a number (perhaps their voices had been exhausted by the previous evening’s karaoke), the SNP’s members, elected representatives and leader were singing a slightly different tune from previous conferences.

That is not to say the party’s achievements weren’t being proclaimed as loudly as before. Walking round the Edinburgh International Conference Centre was an informative exercise, with the SNP’s key policies emblazoned on all the stairs. At fringe meetings on subjects as diverse as local authority procurement and Scotland’s wave energy potential, ministers confidently outlined the Government’s efforts in each regard and how there was much more to come.

The other thread of previous conferences, of key policy levers being denied to Parliament by the UK Government and the need to challenge its worst policies, was also alive and well. Across the weekend, half of the 16 resolutions took such a focus, explicitly criticising the UK Government’s handling of a policy area. They went on to either call for the Scottish Government to continue to mitigate its impact (such as on protecting Scotland’s research base) or demanding full devolution of the policy levers (such as the gig economy).

There was a distinct change in how these issues were being presented. Where once independence was referenced in passing as the best way of securing policy outcomes, delegates and even MSPs were far more forthright that this was the only ‘true’ way. On key issues like replacing EU structural funds and mitigating the two-child benefit cap, calls to mitigate UK Government policies were now dismissed as a crutch for what Alison Thewlis described as the “malfunctioning daleks” of the opposition, seeking to criticise the Scottish rather than the UK Government. The vast majority of resolutions also ended up being framed by the constitutional question. Scotland’s research capacity was not only to be protected from regressive UK Government policies but would also flourish in an independent Scotland that opened its doors to skilled migrants. A Scottish statistics agency was not just important for providing better data but was seen as crucial for feeding into an independent Scotland’s policy priorities.

In effect, the song had changed from talking of independence as a distant outcome to something that could happen in the here and now. This is no real surprise considering the announcement earlier in the week that the Scottish Government would lodge legislation for a second referendum. This meant the language around independence could be more assertive and that a focus could be taken on how that independent state could be run.

No wonder, then, that nearly an entire afternoon was devoted to debating the future economics of an independent Scotland. The proposals in the Growth Commission for how this would be done were generally welcomed, but this was a fiery debate. In particular, the discussions centred around how and when a Scottish currency would be adopted, with some senior figures like Chris McEleny and Chris Stephens speaking against the suggested six tests for adopting this. In the end, a compromise amendment was voted through in spite of opposition of senior party figures which would see a new currency adopted at the earliest opportunity, rather than waiting until the first term of an independent Scottish Government had been completed.

The focus of the First Minister’s speech reflected what had come before. Where once independence would be touched on the closing stages, now it was the centrepiece. Where once it was an aspiration, now there were 2.4 million leaflets to be delivered. There were very significant policy announcements made, including loans of up to £25,000 for first-time buyers and up to £500 of direct support for families when their children reached nursery and primary school. The declaration of a climate emergency also attracted the majority of the headlines, but the most enthusiastic standing ovations in the hall were saved for the proposals on independence.

Some may say the song remains the same, that the SNP are a party set upon independence and so to speak of it at Conference is no surprise. There was a change, though, in the rhetoric and an openness to start to nail down the vision that voters will be possibly offered on the issue. Regardless of whether you believe a referendum will or won’t happen, the SNP are acting on the basis that it will.