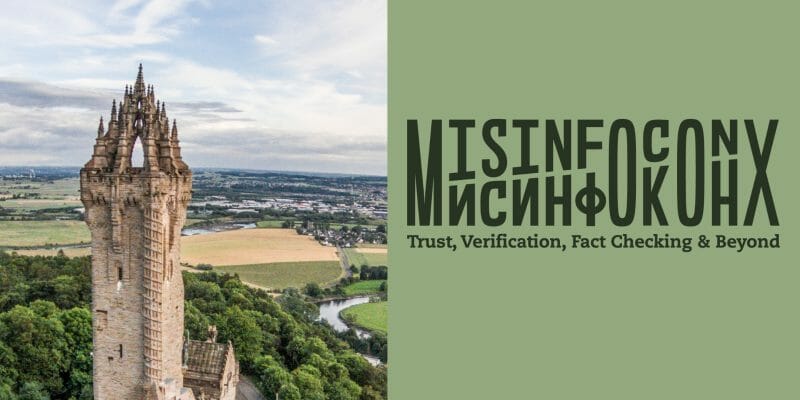 Under the freezing fog on Thursday morning, some of the leading Scottish experts on misinformation gathered in Stirling to discuss ways to stem the tide of fake news and bring clarity back to our online discourse.

MisinfoConX Scotland was a day long “unconference” organised by Scottish media academics in conjunction with Hacks/Hackers, a loose-knit global collective of journalists and hackers aiming to bridge the gap between the two practices.

Much like the TedX series of lectures, MisinfoCon events have taken place across the world, from D.C to Kiev. Discussion on the day placed Scotland and the UK firmly in the international milieu of Fake News, in part due to the divisive atmosphere surrounding Independence and Brexit. But the spirit of the gathering was good-humoured and constructive, with a focus on the latest technological and policy-based ideas for tackling the issue.

“Today’s not just about talking shop on the problems in Scotland” said Dr Jennifer Jones, one of the organisers of the event. “It’s actually about getting together and talking about ways we can come up with solutions”.

Over the course of a few hours, attendees watched presentations from cyber security experts, fact-checkers and citizen journalists and took part in a diverse series of “breakout sessions” that reflected the breadth of the issue at hand.

The term “Fake News” was discarded early on in the day in favour of terms like misinformation, disinformation and “Information Disorder”. A wide range of sources were identified including partisan bloggers, unscrupulous politicians and state-sponsored propaganda.

Dr Jones used part of her opening remarks to address some of the coverage surrounding the conference itself, which had been very much in keeping with the theme of the day.

“This conference has been funded with $200 for the Post-it Notes and the coffee, thanks to Mozilla. We’ve also had lunch bought for us by Secarma” she said.

The announcement of the conference had provoked an angry and mocking response from a Russian state-funded media outlet, which described the event as a gathering of the “Western deep-state”. The small grant from Mozilla, designers of the Firefox internet browser, was cited in the story in an attempt to cast doubt over the independence of the event as was encouragement from MPs like Stewart McDonald.

These types of accusations are familiar to Jones, who has in the past faced trolling and abuse for articles she has authored. Often her approach is to troll right back.

But the tendency for fake news to spill over into the real world, where journalists can face threats, intimidation and violence for publishing inconvenient truths makes the problem harder to laugh off, according to Jones.

“What do you do when this happens?” she asks. “There are no clear guidelines.”

The first seminar came from Paul Mason of the cyber security firm Secarma. Mason described himself as an ethical hacker, using the same techniques as rogue or hostile actors to break into the databases of clients in order to identify weaknesses in their system.

The most surefire way to breach an online database, according to Mason, is by engaging with “the human bit between the keyboard and the chair”. The ability to mislead or impersonate an employee of the target business is an increasingly common approach taken by hackers, highlighting that disinformation is a security issue as well as a social and political one.

Mason rounded off his presentation by having members of the audience create their own automated Twitter bot–  a process he said can take just “five minutes and three keyboard commands”.

Following on from this, a chunk of the conference was dedicated to self-organised “breakout sessions” where audience members participated in group exercises dealing with issues volunteered by fellow attendees. Issues such as the “manufacturing of doubt” by agenda-driven outlets and “both-sideism” within traditional, balance seeking media were addressed. One particularly innovative session involved using role-playing to explore disagreements within a family or relationship environment.

The methodology of the Ferret Fact Service was discussed and its pros and cons weighed by Alistair Brian, who has been fact-checking politicians and Scottish internet tropes for two years after receiving funding from Google’s News Initiative.

Along with Brian was a representative from Newsguard, whose product recently received attention for advising users of Microsoft’s new Edge browser that the Mail Online was not a trusted news source. The content “nutrition label” approach stirred attention but its true efficacy remained in question as the browser plug-in does not yet come pre-installed and so tends to be selected by people “who probably don’t need it”.

The main solutions put forth during the MisinfoCon event are built around a list of recommendations put forward by a European Commission report on disinformation, published last year.

In the long-term it was generally agreed that Scottish policy makers should focus on developing media literacy in schools. Adults, too, could benefit from educational projects, perhaps modelled on the News Club project trialled in Brixton late last year.

In the more immediate term it seems like a combination of existing projects like fact-checking and content labelling may be the best way forward for as long as the future of well-funded investigative journalism continues to look bleak.

Some contributors encouraged a public health approach to the issue of misinformation and disinformation, drawing analogies between the changing social attitudes towards smoking. Could sharing a false news story on Facebook one day seem as uncouth as lighting a cigarette at the family dinner table? How can we bring on a social shift of that sort?

The problem posed by misinformation and disinformation is a global one and there doesn’t appear to be one easily prescribed quick-fix. But it does seem like the conversation surrounding our own online experience is getting more and more sophisticated. Events like MisinfoCon show that Scotland could be a small part of the solution.

Ailean Beaton is a final year student journalist at Edinburgh Napier university and a Westminster Reporter on the Newsdirect monitoring team. An earlier version of this article appeared on EN4News.